Modern Freemasonry was invented by the great thinkers of the 17th and 18th centuries to bring together all men of quality, “that is to say, men who are true and good, or men of honour and honesty, no matter by what name or conviction they can be distinguished”. They were to become the "centre of union" independent of their differences, neither denying them nor erasing them. (The fact that women were excluded is solely due to the societal context at the time; women were later allowed to join).

Anderson’s Constitution - and Désagueliers, too - does not clearly state the objective of this “union”, but, logically, it must strive towards the peaceful coexistence of all humankind.

To make it possible to bring together these “men who are true and good” who otherwise would have certainly “kept their distance from each other”, the founders of the first modern Masonic obedience have moved away religions and churches from their workshops.  About ten years later, religion was re-introduced as part of the values brought by traditional Scottish Freemasons living in London, who were devout Catholics.

Was it under this influence that the idea of ​​a “union” amongst “men of honour and honesty” was transformed into a “universal brotherhood”? Perhaps because Christians consider themselves to be “brothers”. Fortunately, the influence of the Catholic Church did not hinder Freemasonry’s ideal of tolerance.

Christians are “brothers” because they believe they share the same “father”. They belong to the same “family” and only those who embrace this world view can be part of it.

Freemasons have chosen to be brothers freely, apart from any pre-established link.

Christians generally believe that brotherhood is synonymous with love. It can be, this is the ideal, but, above all, fraternity signifies visceral interdependence. Everyone who has brothers and/or sisters knows how closely they are bound, despite an infinite variety of personalities, behaviours and interests that can be completely opposite.

It is possible that scientific discoveries compounded since the days of the Renaissance allowed members of The Royal Academy of Sciences of London to gain an awareness of the interdependence of humans and all other forms of life. In this case, the centre of union may be considered like that of the entire living world.  This belief falls in line with today’s ideas of humanistic ecology.

The formidable “mechanics” of modern Freemasonry succeeded in creating a sense of fraternity, sympathy and love among the members of the lodges, even though they were very different from each other. This feeling may extend to everyone in their obedience, sometimes spreading out to include several obediences. But it never encompasses all of them, despite the repeated and omnipresent proclamations of belonging to the universal brotherhood.

The construction of the centre of union has therefore not been completed. Without finishing this work, Freemasonry is not in a position to build the “temple of a fraternal world”, which is its ultimate raison d'être. Does this explain, at least in part, why Freemasonry lost more than half of its members in the 20th Century (especially in the United States, but not only there)?

Freemasons have stopped mid-ford in a river, gripped with indecision. 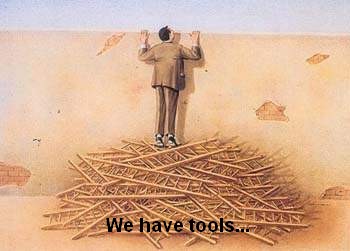 N.B.: The enthusiasm for "social networks" Facebook, Twitter, Whatsupp etc. shows that the young generations - freemasons or not - broaden their horizons towards universalism.